Freedom camp in Racine to narrow the IC2020 squad 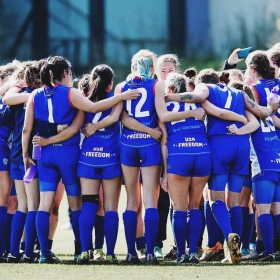 The USAFL Freedoms tilt at the 2020 International Cup in Melbourne Australia goes into full swing this week with a 4 day camp in Racine Wisconsin.

Earlier in the year at an Arizona camp with 75 players in attendance the USA Freedom selection panel lead by head coach Christina Licata, selected 54 players from 125 available to remain in IC2020 tour contention. In Racine this week from Thursday 14th through to Sunday 18th, over 40 of those players will be striving for selection in the 28 player squad to head to Australia in 2020. That squad may also include players currently playing outside the USA with ten squad players playing overseas in 2019, mainly in Australia, but also in Ireland.

This week USFootyNews heard from Coach Licata who related "While selection for the squad that will ultimately compete at the International Cup in 2020 won't occur until the Nationals Championships in Sarasota, performance at the 4-day camp will factor heavily into the coaching team's decisions."

Licata with all the assistant coaches this weekend will put all the players to the test, the 4-day camp will feature;

At the 2017 IC the USA Freedom did not live up to their own expectations after several set backs through injuries and finished with a 2-3 record. Leading Great Britain in the last game at 3/4 time, the Freedom team saw that game slip away in the final minutes to finish a disappointing 2017 campaign in 4th place.

For 2020 however we see a far greater preparation through well attended and stronger Regional Championship games, Freedom camps and initial squad selections allowing a far greater pool of players prepare for selection. Also with several players having valuable match and training experience in Australia since 2017, all other teams better watch out in 2020.

That Freedom roster will be announced at the 2019 National Championships in Sarasota FL however we are sure there are 40 or so women footy players getting ready for a massive 4 days in Racine Wisconsin this week.

Read 1699 times Last modified on Tuesday, 13 August 2019 23:08
Tagged under
More in this category: Christina Licata, a remarkable unfinished Footy story »
back to top