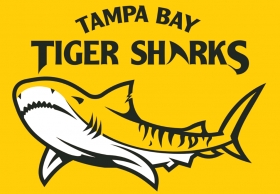 In recent times we have seen the reemergence of footy teams in Florida. Last year the Jacksonville Saints were fully established and this year they brought several players to the USAFL Eastern Regionals to play with eventual Division 2 winners, the Boston Demons. The new Saints team also played with the Atlanta Kookaburras and Rome Redbacks in an exhibition game in Savannah Georgia in late June as those teams assist with team development in Georgia.

Apart from that activity we wrote recently about maybe the darkness footy has been in recently in Florida. So we reached out to a few leaders of the new Tampa Bay Tiger Sharks club to get their side of things.

Tampa Bay Tiger Sharks have affiliated recently with the USAFL after the implosion of the Major League Footy organization. An organization we were informed that was being run basically by just one person. Several players in the Tampa area were becoming disillusioned with the MLF set up, as it was to them just scrimmage games with no real competition. Players would come down, pull on a different uniform each week however the results would be posted on the league website for whatever team colors they represented as legitimate games. “There were games versus Ft Lauderdale as well but they were not very well organized”, new club leader Robbie Scarallo said recently.

Born in Dubbo Australia, Robbie Scarallo and others like former Columbus Cats players Tom Mathews and Claire Conley recently formed a provisional committee to restart footy in the Tampa region. After the press release of the USAFL recently and the design of their new logo coming with that news, Scarallo said “I am confident a brand new “voted in” board of management would be in place by the end of July.  Currently we have ‘around' 20 players we hope to get out onto the practice field from the past MLF group, however early numbers are much lower than that.”

Other plans have also been discussed about also splitting into to local metro teams quickly so the club can immediately play competitive games without having to travel far. Tampa although a very large city the Tiger Sharks are still a long way away from any other USAFL club. Ft Lauderdale is 4 hour drive away on a good day and Jacksonville is 3.5 hours as well, so establishing rival teams inside their own city is probably a must do.

With the USAFL National Championships just a 1 hour drive south to Sarasota this October the Tampa Bay leaders are confident they will have enough players and enthusiasm to again have a team playing in the biggest footy event outside of Australia.

Probably the next point of interest will be to see if Ft Lauderdale can also regroup and fully return to the footy fold and if any other clubs can be started in Florida, especially one maybe in the central Florida region like Orlando. That would benefit all the other clubs in the Florida state greatly at the same time.