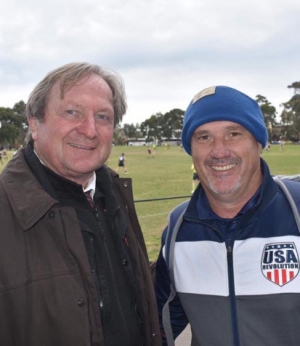 On the recent 'Outside 50' podcast with Tom Ellis the USA Revolution Head Coach, we learnt things are changing up in a big way for the USA Revolution and the International Cup in Queensland Australia beginning in late July. With the increased opportunities for US players to play in Australia, Tom and his fellow coaches have quite the dilemma on their hands trying to select the best team for the 2020 IC.

"It is a great thing to have happen really for the team" Tom said. With nearly a dozen USA players now playing in Australia, mostly in the Melbourne suburban leagues, its making the selection process to make the USA Revolution team more complicated but more exciting at the same time.

Tom first played with the Denver Bulldogs in 1999 and has been a part of the Bulldogs legendary eight Div 1 championship wins, the last being in 2011. Tom has also been a player himself in two International Cups and this year will be his second time visiting Australia as Head Coach of the USA Revolution.

With a Revolution camp coming up in late February in Houston Texas and a separate tour planned to Croatia this year, headed up by Kyle Strenski, the USA men's team development is certainly going ahead full steam. There are still player spots up for grabs too with the final team of 28 and 2 emergencies to be named after the late February camp in Houston. From then on it is fundraising and ensuring players are prepared physically and mentally for the two week tour on the Sunshine Coast of southern Queensland. A stark contrast from every previous IC which have been held in Melbourne and notably under wintry conditions.

There is no opportunity to play on the MCG this year, but the final of the International Cup will be curtain raisers and curtain closer at a Brisbane Lions v North Melbourne Kangaroos game at the GABBA on August 8th

You can follow along with the Revolution team in the lead up to the IC on their Facebook page here.