The Atlanta Kookaburras kicked off their 2019 season with a solid home game win against long time rivals the North Carolina Tigers, taking the honors by 62 points. Playing a full scale game for the first time at NH Scott Park in Decatur, the Kookaburras hit the scoreboard early and never looked back.

With a mixture of past players returning and some new recruits the Kookaburras lead at every change and broke up the game in the third term with a 6 goals to 1 quarter. New players Seth Stokes & Tanguy Peres combined well with the returning George Huntzicker in the center and Chase Trujillo who was playing his first game back in two years.

Up forward Asst Coach Linley Laverdure helped himself to 4 goals from as many shots and was well supported by Tom Gultom and Chase Trujillo with 2 and 3 goals respectively. Holding steady in the backline were Club Captain Ryan Downey and his Vice Captain again Braden Medders who used their experience to thwart many NC Tigers attacks. The visiting team put up a valiant effort and kept the Kookaburras honest at every chance however fell short on the day.

The Kookaburras next game is their first trip up the road NW to Rome GA on May 11th to take on the Redbacks. A team they helped start last year and got beat twice for the effort, so some redemption we are sure is on the cards. 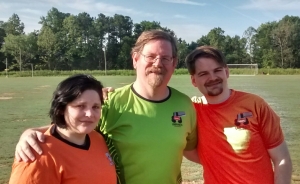 Back in Little Rock Arkansas a twelve year old Seth McElvaney started following Aussie Rules Football after he came across a remote reference to the game in a set of Encyclopedias. He started watching games with some of his young friends when he could on the brand new ESPN channel.

Move forward many years to 1997 after moving Raleigh NC with his family and attending Grad School at NC State, he came across a website called the US Australian Football Association. Seth noted at the time there was a team in Greenville South Carolina called the SC Hawks.

When contacting the leader of the USAFA at that time, Paul “Plugger” O’Keefe, Plugger asked him if he had ever played, have anyone else there that played, or been to a game.? The answer from Seth was no to all three questions however Plugger said “We’ll send you a football, how about that?” So was the beginning of Aussie Rules in Raleigh North Carolina.

The Cricket club in Raleigh that year had an AFL Grand Final watch party and Seth used that event and advertising in local newspapers to try and recruit players.

On July 4th 1998 in a grassy parking lot of the Surry County Fairgrounds in Mt. Airy, NC with the help of  Roger Jolly, he played his first game with 5 other players and 6 guys from SC. Not knowing the size of the field needed Roger marked out a full size field some 175 yards long for the 6 a side game. There was a 2 hr half time to eat BBQ & watermelon and Seth managed a goal on debut. Towards the end of the game people started to arrive for 4th July fireworks celebrations at the fairgrounds and cars mildly interrupted the game as they drove across the field, not knowing there was a game on.

Seth started the NC Tigers (the team mascot coming from his watching AFL games as a kid) and was the President, Treasurer & Secretary at the beginning. In 1999 a club Board was elected and he became the official Treasurer from 1999 to 2003.

In the early years Seth played 20 odd games for the NC Tigers before getting the call up to umpire a game when the umpire for the day had got lost driving to the game, no GPS thingo's in those days. Seth was the only one that may have known all the rules and so began his long umpiring career in the USAFL. During the weekend at the 2019 USAFL Nationals in Sarasota, Seth will umpire his 200th USAFL game as either a boundary, goal or field umpire.

Seth is now a Level II field umpire and was the second umpire in USAFL history to achieve that accreditation behind Jeff Persson from Nashville.

Seth has had some funny times just like in any football club. The 2001 USAFL National Championships in Washington D.C .was one he recalled where four cars with players allegedly left Raleigh for DC Friday afternoon, but later that night only three had made it. Finally a call from the occupants of the 4th car was received. They had taken a wrong turn leaving Raleigh and were in Florida, apparently driving through South Carolina and Georgia to get there. They would be heading north now and would meet the rest of the team at the first game at the field Saturday morning.!

The NC Tigers have been at the forefront of footy development since the start and Seth looking back hoped he and other clubs could have done more to keep the game going at college level. The UNC and NC State campuses both had teams for a while and would play against each other, the first such games in the USA.

Seth during our interview offered USFootyNews his ideas for the continued growth of the game in the US.

“Focus on growing the game in your city and try to get the game going in nearby cities. It's still to this day hard to get players excited about a sport when the nearest competition is over 200 miles away. When we had the South East AFL, we had too few teams to keep it going. Now that we have Atlanta, Rome and maybe Savannah in Georgia, and Jacksonville Florida coming along here in the South East, maybe we could get it going again in 2021?  The 9-a-side game can also be a good tool to help out the clubs starting out, but only if the games are taken seriously.  Get past players to stay involved on the administrative side of things, grow and support the umpiring corps and finally maybe make connections with Gaelic football clubs.  I got the first International Rules Game in the South-East going several years ago and it helped with recruitment for both codes.”

Seth has a seen a lot of footy like anyone that has been around this game for 20+ years but his also thrilled to have his two children Olivia and Ethan participating as goal umpires now, as seen in the photo above at the recent USAFL Eastern Championships in Raleigh.

Congrats Seth from us at  USFootyNews and we are sure everyone in USA footy circles applauds your years of work and continued service to the game.