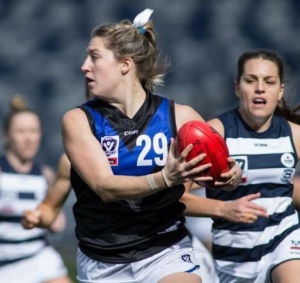 Recently the USAFL released their Australian Football Development Handbook. The handbook is primarily the work of Katie Klatt who developed the handbook as a project of the USAFL Development Committee's Safety Group. Katie was the Vice Captain of the USAFL Freedom at the International Cup in 2017.

"I thought this handbook could just be a good resource for those little specifics of footy we all take for granted, but are actually not as straight-forward as we see it!" Katie told USFootyNews this week.

The 25 page handbook covers many areas of player development with sections on learning skills, playing the game and safety, just to name a few. There are excellent reference links to videos, documents and other important resources contained in the handbook. Everything is covered that a new or recent player to the game of Aussie Rules Football would need to improve their footy and become a more knowledgeable and better skilled player.

You can download the Handbook here. USAFL Development Handbook

Katie Klatt herself is a much traveled footy player having just spent three years playing Aussie Rules in Melbourne Australia and now is back in San Francisco playing for the Golden Gate Iron Maidens.

Originally a player for the Sacramento Suns, Katie went down to Melbourne and played VFLW with the Melbourne Uni Mugars for three seasons. The Mugars are one of the strongest and most successful women's teams in Melbourne. There was some adjustment and hard work needed in Melbourne, Katie told  USFootyNews.

"I had to work my way from their Div 3 team to the Reserves, then to VFLW each season as I got more experience."

"It was quite different playing in Australia. The knowledge of the game is significantly higher, and the skills much more silky and natural. The hits are harder and the speed is so much faster. It was definitely an adjustment." Katie went on to say.

We asked Katie what did she think was different now back in USA footy after 3 years away?

"I'm really excited by the growth I've seen in the US women's football scene since I've been gone, and the fact that so many women are starting to be interested in playing in Australia. And with so many new players coming out the Handbook was developed as I was hoping to encourage people to learn to tackle and play safely. We want this spread out to as many people as possible."

Finally, the travels may not over for Katie. Katie told USFootyNews she will be on the move again after this year's national championships in Sarasota Florida.

Where will Katie play in 2020? That might be a story to be covered at another time, for sure she will be a huge part of the USA Freedom's IC2020 campaign. For now thought Katie is officially a Golden Gate Iron Maiden! Congratulations Katie on your contribution to USA footy from USFootyNews and all your footy family.